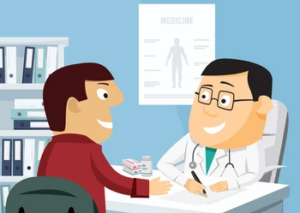 There was a businessman, and he was not feeling well, so he went to see the doctor about it.

The doctor says to him, “Well, it must be your diet, what sort of greens do you eat?”

The man replies, “Well, actually, I only eat peas, I hate all other green foods.”

The doctor was quite shocked at this and says, “Well man, that’s your problem, all those peas will be clogging up your system, you’ll have to give them up!!”

The guy says, “But how long for, I mean I really like peas!”

The man is quite shocked by this, but he gives it a go and sure enough, his condition improves, so he realizes that he will never eat a pea again.

Anyway, one night, years later, he’s at a convention for his employer and is getting quite sloshed and one of the reps says, “Well, ashully, I’d love a cigarette, coz I avint ad a smoke in four years, I gave it up, but tonight I’m gonna have one.”

The bartender hears this and says, “Really, I haven’t had a game of golf in 3 years, because it cost me my first marriage, so I gave it up! But tomorrow I’m going to sneak a quick one.”

The businessman then says, “Thas nuvving, I haven’t ad a pea in 6 years.”

The bartender jumps up screaming, “Okay, everyone who can’t swim, grab a table…”