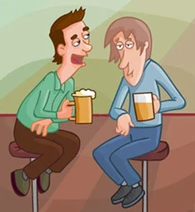 Two men are sitting at a bar, slowly sipping their drinks.

After a while, the first man approaches the other man, and sits next to him. “This place is great, isn’t it?” he asks.

The second man, somewhat surprised at the stranger’s remark, replies, “Why do you say that?”

The first man, in a low tone of voice, responds, “Follow me.” The two of them walk over to a large window at the end of the room. The window faces out onto the street, 12 floors below.

“Here’s why.” The first man throws open the window, and boldly steps out into thin air. But he remains aloft!

He floats back into the room. As his feet return to the bar-room floor, he invites the second man to try it.

The second man, skeptical, peers out through the window – down to the pavement twelve stories below. He looks to either side, and finally up above, to see if there was anything holding the first man up.

Convinced that it was no trickery, the second man swallows, closes his eyes, and steps out into thin air. He promptly falls twelve stories to the pavement below.

The first man grins and returns to the bar. Looking rather irritated, the barkeep comes over to the place where the man sits.

“You know,” he says, disgusted. “You’re a real jerk when you’re drunk, Superman.”